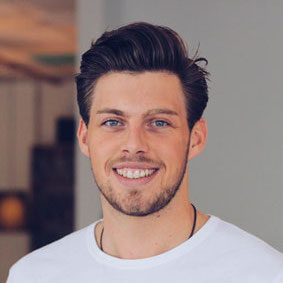 Jon, the European brit as he calls himself, is the founder of Us Berlin and Racemappr. Moving to Berlin to create his agency and startup he has been living in the German capital almost five years now. Growing up outside London in a small town called Harpenden, he graduated in Business at Cardiff and furthered his studies with a post-graduation in Advertising and Communication. Starting his career in a true “Madman” style Advertising agency, he worked with a whole spectrum of products like cars, beer, finance and health. After arriving in Berlin Jon ran an international agency where he met some great people in his job, he found the company’s environment limiting. So, he decided to invite 10 of his best contacts across design, writing, management, photography and more to openly talk through the idea of collaborating. Everyone loved it and never looked back.

There are other thousands of design agencies in Berlin. What makes you different?

The same thing that makes all agencies different - the people. Creativity comes from all of the influences, learning and culture that your individual team members have. Our structure is about creating the best environment to bring that together to challenge and improve the work - and we really see the impact it has. We are also far more than just a design agency, as our heritage is in architecture, advertising, strategy and business - and this is reflected in how we consult our clients. We remain more flexible than traditional agencies because our structure is more fluid.

You run your design agency from the betahaus, collaborating with plenty of betahaus members. Tell us about your team members and working style.

The collaborations extend beyond just the idea of client / corporate projects. As curators of the cafe walls in the betahaus cafe, we combine with other artists and designers because we love to broaden our own perspectives and influences. The agency is a structure to help us work on our own creative projects and ultimately make more happen. Teo, my partner in the agency, heads up the creative team. She’s worked with me since the beginning and helped craft the agency into what it is now. We balance out each other's skills and personalities to run the team, and get great new input from them on top.

You recently launched Racemappr, a platform to discover running, triathlon or cycling races near you. Is it a side project? Did you develop it with the same team behind Us Berlin?

Racemappr is a platform to help anyone discover their next challenge. It helps inspire people by connecting them, on a local level, with racing communities and event organisers. It’s more than a side project and my vision is pretty big. Naturally having clients for the agency, their needs come first, but I find a way to manage it. It’s just about having a balance and I am supported by some great people. Yes, there is some crossover in the team, which is why it’s a great one. Everyone has shown amazing passion and support for it and have been instrumental in getting it this far.

How did you figure out there was a need for such a product? Are you active yourself in any of the activities Racemappr searches for?

I love to race myself. Particularly triathlon and running but I am also open to any challenge. The feeling of completion when you have pushed yourself is amazing, which is why the market and community is always growing. I just saw an opportunity that wasn’t being filled, mainly based on the idea that many other services were simplified versions of what I think can really help this community. It really is a case of mixing things together that I’m passionate about to solve my own needs. I’ve consistently shared the plans with organisers, racers and other stakeholders which has not only taught me a lot but also given me the constant drive, because they really want it too.

Running such big projects must not leave you with a lot of personal time. How has your life changed since you started your own company? Any wisdom to share with the other betahaus members about what you have learned in your entrepreneurial journey?

I always use the word balance to justify whatever phase I’m in. And I also realise that to function I need variety in both work and play. But at the same time, whilst sounding naff, most of it doesn’t feel like work. It’s just my journey of creating and growing what i’m interested in. Having won the beta fest ‘party animal’ award last year, I don’t think the violins need to come out just yet.

We’re more than happy to grab a coffee with anyone who is looking for creative services to see how we can help them. Or anyone who is interested in what we are doing with Racemappr should join the site and is welcome to get in touch - we always welcome feedback.

Want to join Jon and other entrepreneurs at betahaus? See how here!